The razor wire that separates Greece and Macedonia, at the refugee border control, is about 15 feet deep. Its newness glistens in the sunlight, and a fresh coil is visible on the Macedonian side.
Clearly the job is not yet complete.

I stand and stare.

Another volunteer is by my side. He reached out to me. There were no words.

There are about as many opinions in Greece – regarding the refugee situation – as there are aid organisations.

I met a refugee from Syria, who has remained in Greece to liaise with  voluntary organisations providing assistance. ‘We need to be robots’, he says. ‘…to feed, clothe and transport refugees efficiently’. He explains that there is no room for sentimentality, as he sees it, for painting tents to make them more homely, or even for unnecessary conversations with refugees. A waste of valuable resources, in both time and money, he says. “When people arrive they need a sandwich, not talking’.

I spoke with a doctor, whose parents were refugees,  who insisted that the majority of the refugees were economic migrants. He told me that he had been advising patients to return to their own countries, to get an education, to find a way to change the political system. He felt strongly that people wanted a ‘quick fix’ in order to improve the quality of their lives.

Then there was the US lawyer who suggested that all the borders should be opened, free movement for everyone. Like  running water, he says, things would eventually find their own natural level.
His other plan was to offer Assad three million dollars to leave Syria.

I’ve listened to arguments about the difference between a migrant and a refugee. For instance, should Afghans and Iraquis be granted refugee status if their respective countries are no longer considered to be at war, are they actually economic migrants? Maybe it is more a matter of how we define war? Some seem to consider the wars in Afghanistan and Iraq to be over – pointing out that the UK and US military operations have mostly withdrawn. Others insist that we bear enormous responsibility for the position that Iraqis and Afghans find themselves in today, and how quickly we have forgotten our invasive role in this complex equation.

There have been discussions, about the logic behind automatic asylum being granted  to refugees from Syria, Afghanistan and Iraq (SIA).

Application for asylum, according to the Geneva Convention, shouldn’t be regulated by race, but by individual circumstance, and available to all those who are persecuted, not just those at war.

The 1951 Convention protects refugees. It defines a refugee as a person who is outside his or her country of nationality or habitual residence; has a well-founded fear of being persecuted because of his or her race, religion, nationality, membership of a particular social group or political opinion; and is unable or unwilling to avail him— or herself of the protection of that country, or to return there, for fear of persecution (see Article 1A(2)). (UHNCR.org)

And the refugees from countries such as Sudan or Somalia, where does this place them on the political asylum seekers board game?
Persecuted, war driven, but not part of the chosen SIA.

I’ve listened to numerous opinions on the efficiency of aid organizations, both NGOs and independents. I don’t think that there is any doubt that the aid agencies, voluntary groups, NGO’s and everything in-between, are really providing an incredible service. And their combined efforts cannot be underestimated. Every day lives are saved, people are fed, clothed and offered shelter, and legal advice is provided. There is a massive support structure operating here.

But there is also a huge frustration concerning the lack of joined up action between the multitude of organizations. Each one, large or small, works to establish a role in this chaotic operation, and once created, works even harder to defend it. A medic from the US complained that a large NGO was preventing him from providing dentists for the refugees, for which he had the resources and contacts. Even though that NGO wasn’t providing dentists themselves.
And this defensive culture filters right down through the thousands of individual volunteers. Each one claiming a little territory, each one continually validating their own presence.

And many volunteers complain, that responses to this continuously evolving crisis are autonomously driven. Very little communication, co-ordination or most importantly sharing of information is happening.

‘The smugglers are light years ahead of the NGOs,’ commented a Swiss doctor. ‘They have an extensive network crossing all the borders from Syria to Iraq’. And a young Afghan concurred. A refugee would typically pay a smuggler in their country of origin, he explained, and this would cover the entire journey into Greece.
He also said that that this didn’t prevent smugglers along the route from using extortion to relieve them of their money and valuables.
When I asked him if it were possible for a refugee to travel without the help of smugglers He smiled politely, and explained that without local knowledge in each country, refugees would certainly be picked up and either imprisoned or returned to their country of origin.

Some criticise the bus drivers in Greece – the ones that drive refugees between Athens and the Macedonian border. They see them as an extension of the smuggling operation. The buses are privately run and the fare appears to be ‘flexible’.
But others argue that the bus drivers are ‘business men’, providing a service, operating on a basis of supply and demand.

The same, it could be said, is true of the smugglers, and the Aid agencies. 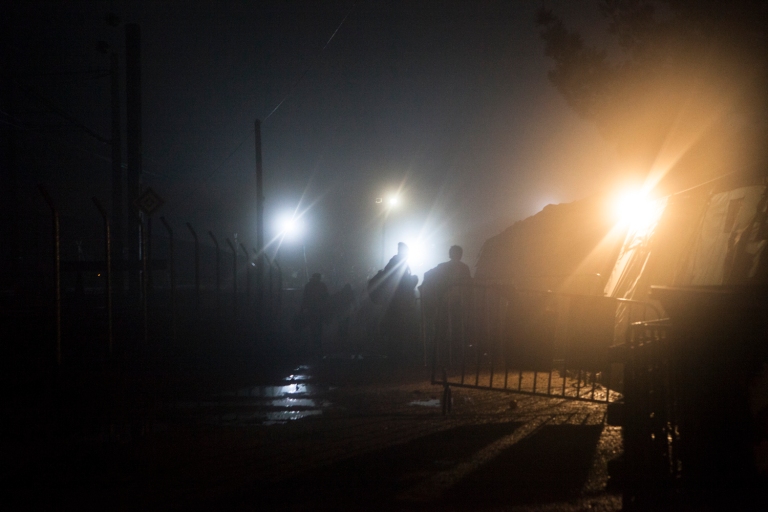 And with each fresh batch of volunteers, these arguments are reiterated, until they become tired, and lose their momentum. 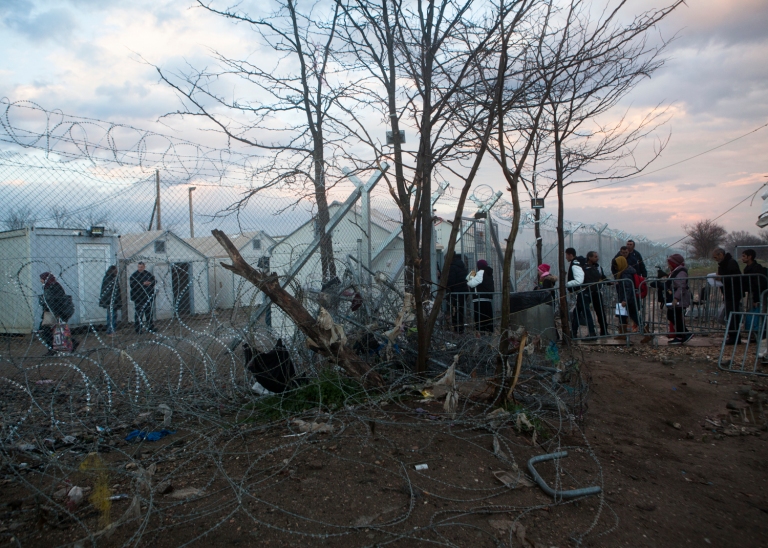 Today I met some incredible human beings, full of warmth and generosity of spirit. An 18 year old Syrian woman who spoke perfect English. She was looking for some shoes for her little nephew, and so they had come to the clothing tent. The volunteers kitted the boy out in some second hand shoes, and made sure that he also had a jumper and warm jacket, in a size that approximately fitted.

I lost count of the number of times she thanked us.

The young woman was travelling with her sister and her sister’s five children. A confident 18 year old, with a warm open personality, and inter-personal skills that most adults would be proud of. The kind of young person that you just know is going to succeed in life.
But before she and her young charge left the tent, one of the volunteers noticed that she too could use some shoes. And when asked, it became apparent that she simply hadn’t wanted to ask for herself. And she repeatedly apologized for needing shoes, and thanked us yet again.

Then there was a young Afghan man who was just 16 years old. He had been travelling for a month with his brother and his cousin. They had walked from Afghanistan, through Pakistan, Iran and then Turkey. Can you imagine? Then they had crossed the Aegean sea on a dinghy and finally bussed up to the Macedonian border. He spoke excellent English, and had been operating as an unofficial translator at the camp, helping other refugees that had been experiencing difficulties with their registration papers.

He told us that his father was a farmer, and that he made his living growing pomegranates. He said that his father had sold his land to pay the smugglers, so that he and his brother would have a chance at a better life.

In one month they had spent $20,000 (US), and all they owned were the clothes that they stood up in.

And then came an announcement, the border was open. Numbers were called out, and some people approached the checkpoint.

There was a family, with a boy of about 13 years of age who was hobbling. His feet were blistered from walking. A volunteer found him some bandages and thick socks before he went through the checkpoint. He was with his mother and grandmother and they were beyond weary. 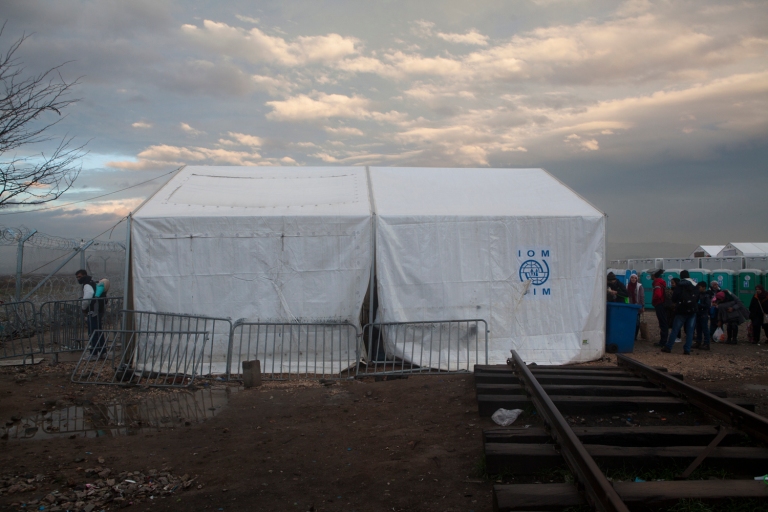 I saw a man with a baby on his back crossing the border with his family. When his son (of about 14 years of age) tried to cross, the guards stopped him. It’s not always possible to understand what is happening – apparently even when you do speak Greek or Macedonian – but it appeared that some numbers didn’t match up for the border police, and so access was denied.

And so the boy is stuck on one side of the border, his family on the other.

Three young men queued up to cross, but they were refused entry to Macedonia because the Greek registration system in Athens had failed them. ‘Registration Papers,’ are a grand term used to describe a piece of paper, that contains a photo, and a few personal details hand written by the Greek police. Sometimes this information makes it onto a data base, sometimes not. Sometimes it is accurate, often it is not. One of the refugees expressed his frustration that fingerprinting wasn’t being used. With all the technology available today, it’s somewhat unbelievable, that the registration process comes down to a guy with a pen, speaking in a foreign language. Sometimes refugees names are spelled incorrectly, and in this case, the three refugees had all been allocated the same registration number!

How do you explain that, in a foreign language, to a Macedonian guard who just wants to get back to the football?