Ah a hot bath – what a treat! So far our range of accommodation has only had showers, and to be fair not all of them have been, how shall I put it? Effective. Mostly they have looked like showers, with a curtain and some kind of hose, but that’s usually where the resemblance has stopped. Think multidirectional, think random-temperature, think vari-speed. But mostly think cold. And so I really appreciated this opportunity to submerge my whole body under warm bubbles – and think.

This morning began early, around about 5.30 am. That’s when we set off to see if any help was needed with boats landing. 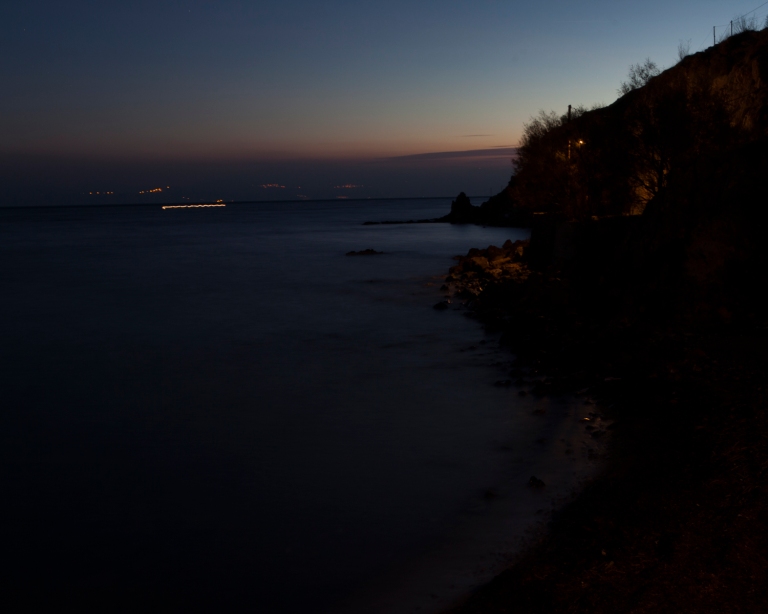 This was the scene at Efthalou on the NE coast at about 6 am. Dawn was breaking and there was a light trail made by a large boat moving through the water. It’s just possible to make out the lights on the Turkish coast in the distance.

Refugees, making the trip from Turkey, have been landing along this coast line for more than eighteen months. Here, voluntary rescue agencies pick them up and transport them to local camps, or on to Moria in the south for registration. But there is a new system being trialed at the moment. Important heads have come together, and it has been decreed that coastguards should now pick up refugees in Greek waters, and deliver them into port. Here in the north, that means Molyvos.

So we headed down to Molyvos, a picture perfect fishing village with its glorious postcard views. If any of you have been to Clovelly in Devon, it’s of a similar ilk, but without the cobbles or the donkeys.

Sure enough, at about 8.30 am the first of three boats chugged into the port. Bringing with it people from all walks of life. 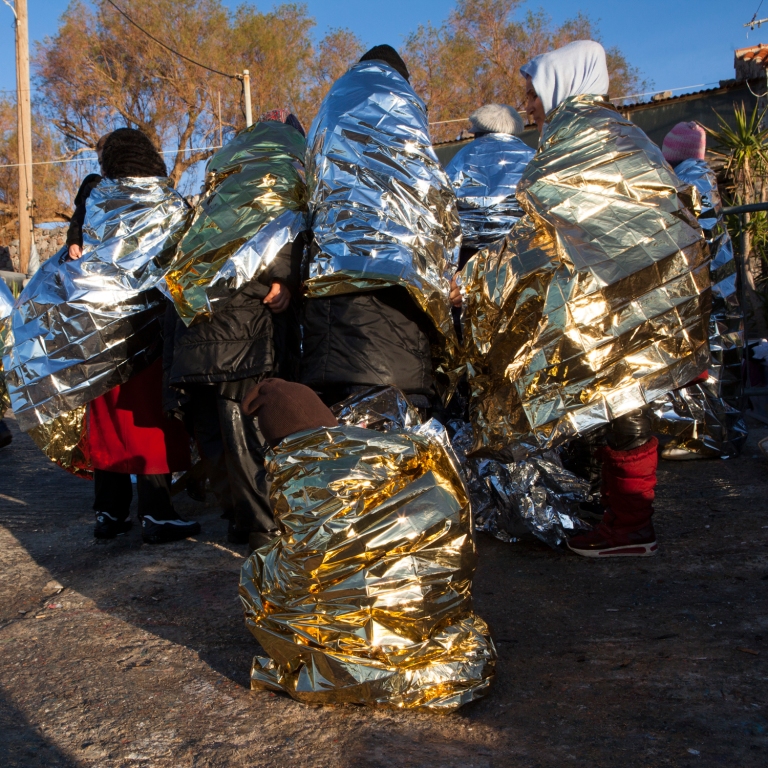 I met a young boy aged about 12. He was travelling with a relative and they both had their heads stuck down between the rocks. Vomiting.

I held a baby of about 3 or 4 months old while her parents changed out of their wet clothes. I pulled faces to make her smile and she looked at me part puzzled, part amused. Maybe she hadn’t seen anyone who looked like me before, or maybe I just looked ridiculous.

I got into conversation with a guy from Iran who was about 30 years old. He spoke excellent English with a very British accent -confusing at first as the American accent is much more prevalent. But he told me that he had lived in Britain for 13 years. He knew Derbyshire and Manchester, Sheffield and Liverpool and said that he wished he had been born in Britain, but sadly he wasn’t. He told me that it had taken 9 hours to get from Iran to Turkey and then another 4 to come across the Agean sea. I’m guessing that last time he made this trip it involved a simple flight into Heathrow.

His trousers were wet – soaking wet, and I offered him an emergency blanket. At first he refused, out of what I suspect was politeness. But when I pointed out that he was shaking, he took the blanket and thanked me. He told me that it had been very windy on the sea and that they had been continually bailing out water. A woman had almost fallen in, but he had managed to grab her and save her. That’s how he became so wet, he said, ‘next time I’ll let people save themselves’ he joked. 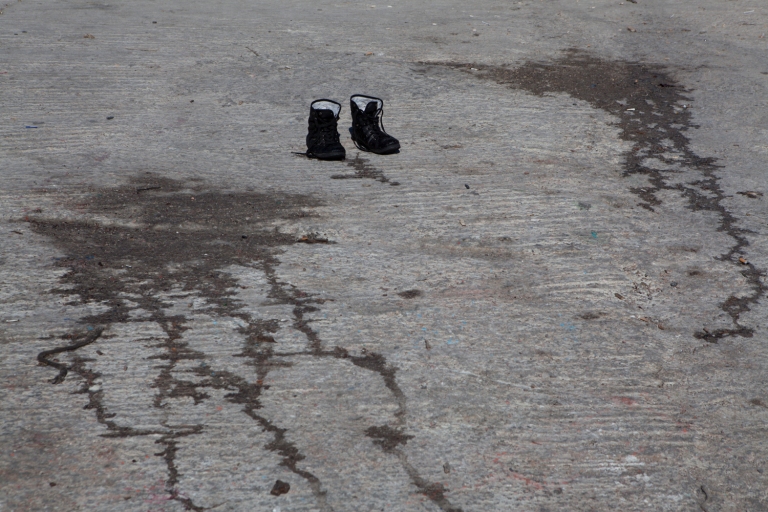 Just then another boatload of refugees came in, but before I headed off I gave him my email address. He promised to contact me and let me know what happens to him, and to look me up in England. Most touchingly he said that he had photos of his entire journey so far, and offered to give them all to me.

Another 40 or so passengers disembarked in the harbor, this time many were from Afghanistan. The volunteers made makeshift socks for them out of emergency blankets, and offered them sandwiches and dry clothes. Medics from MSF checked out the children and the elderly, the injured and the vulnerable.

And the young Afghans, overjoyed to have arrived, made selfies on the harbour wall to send home. 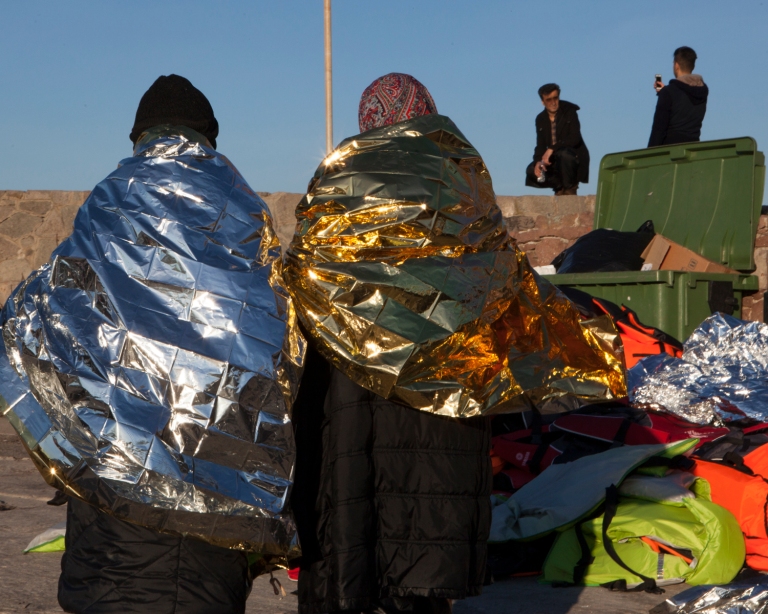 The welcome committee at Molyvos consists mostly of volunteers from the Star Fish Foundation – commonly know as Star Fish. A charity that works around the clock, meeting and greeting, feeding, clothing and bussing, and then mopping and cleaning up the debris afterwards. And it is a major operation. Star Fish are organized, slick and meticulous, striking the right balance between efficient and compassionate. It probably takes them about 45 minutes to turn around each boat-load of refugees.

No time to catch ones breath, or take stock of where you are and what you have just been through. A line snakes up the hill where the buses wait, the transport to Moria. 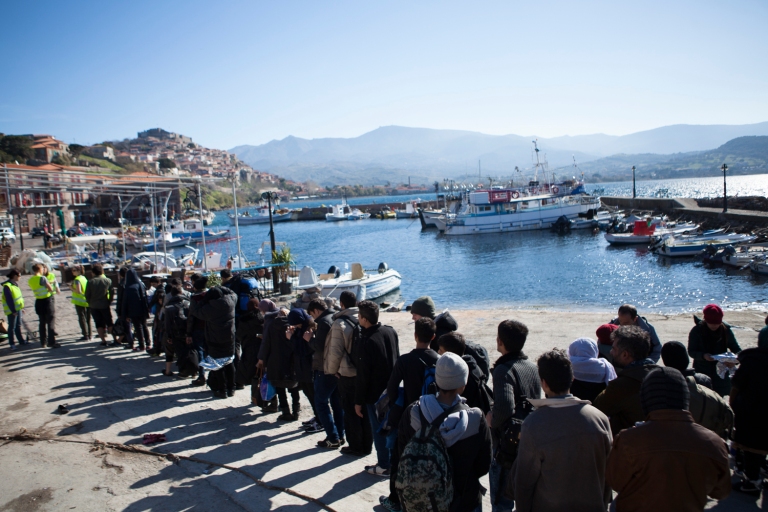 Star Fish work hard to be invisible. Embroiled in a sensitive political situation, they help to keep local tensions to a minimum, by removing all evidence of the mass migration. Hidden behind strips of plastic sheeting, lies a makeshift cupboard that contains everything needed when a boat arrives. Coats and sandwiches, dry shoes and biscuits, bottled water and baby food. And as each line of refugees vanishes up the hill, so every last box, blanket and bin bag disappears back into that cupboard. 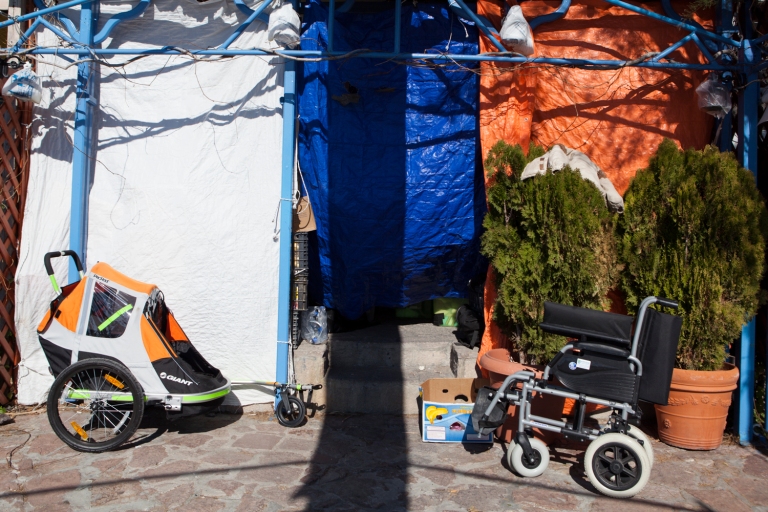 This evening we visit The Captain’s Table restaurant, run by Melinda McRostie and her husband Theo. As well as being a wonderful little eatery it is also the hub for Star Fish. Here, plans are made, strategies worked out, volunteers inducted and it’s no overstatement to claim that lives are saved.

The wind has picked up – the sea is black and the waves choppy. I’m cold but I know it’s because I’m hungry and I’m fortunate that that will change.

But I’m uneasy about relaxing in a restaurant. It just doesn’t feel right. It’s only been a few hours since I was handing out blankets, and picking up discarded life jackets. It was only at lunch-time that I met my new Iranian friend. I can clearly see the faces of the young couple, asking me if I had anything to eat – anything at all for the mother to be?

And here I am sitting down to dinner with a nice glass of wine.

It’s the ‘us and them’ of it all. That’s what keeps coming back to me, day in, day out. How lucky I am to be handing out biscuits and collecting trash. 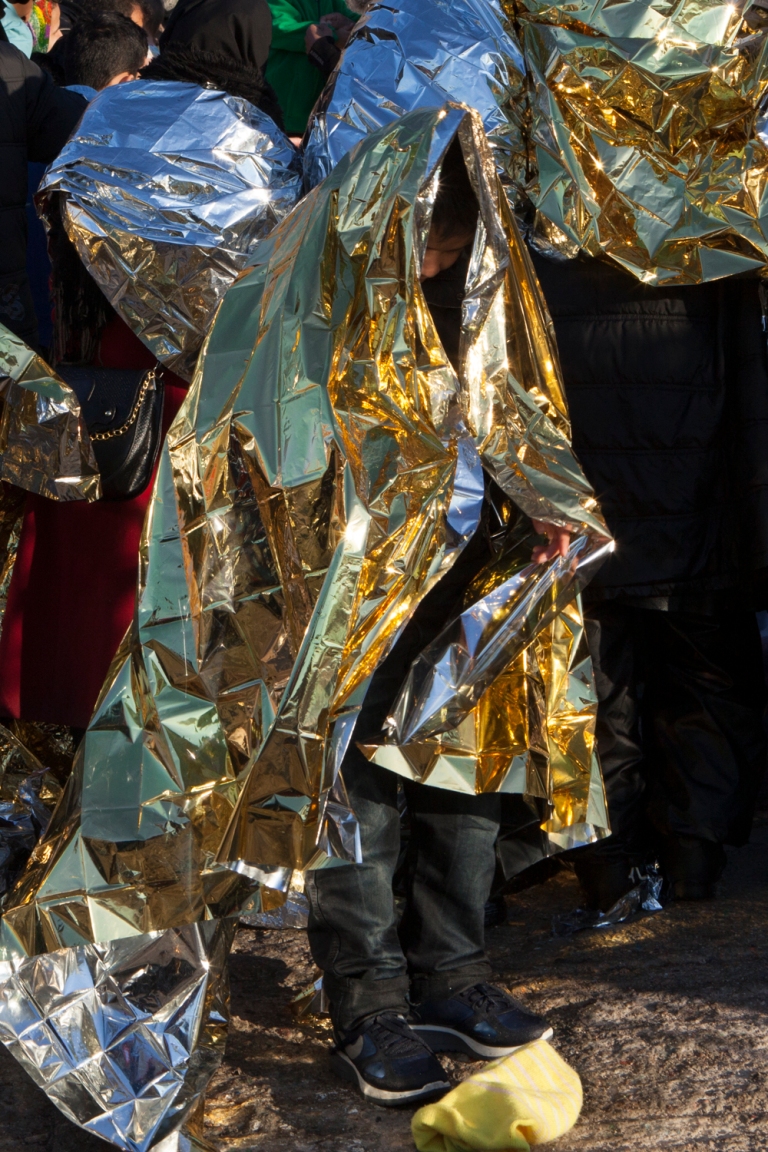 I sit sipping my wine, and my distinctly fuzzy brain struggles to make sense of the situation, but finds it impossible to square the circles.

The events of the day bounce around in my head;

An Iranian man has just risked his life on the sea with 60 other people. The dinghy he was travelling in almost capsizes, and the ‘passengers come crew’ have to keep bailing it out to keep it afloat. On arrival we hand them tin foil and high energy biscuits, and put them on a bus to heaven knows where, before cleaning up the harbour for the next lot.

The conversation that then took place between us,  would appear to be completely and utterly surreal. A polite exchange of niceties about his age and occupation, which part of England I am from, and how long it had taken him to travel to LesVos – as if he’d just come up the M40 for a business meeting in Birmingham!

And, possibly the  most perverse thing of all – the young man jokes about saving the life of a fellow passenger in what must have been a terrifying ordeal!

Yes, yes, I hear you say – it’s shock, it’s normal, it’s a coping mechanism. And the therapists among you will have many words and phrases to describe what I’m feeling, that will explain the banal conversation, and my new found guilt about eating in restaurants.

But it is still crazy – and the circles are still round. 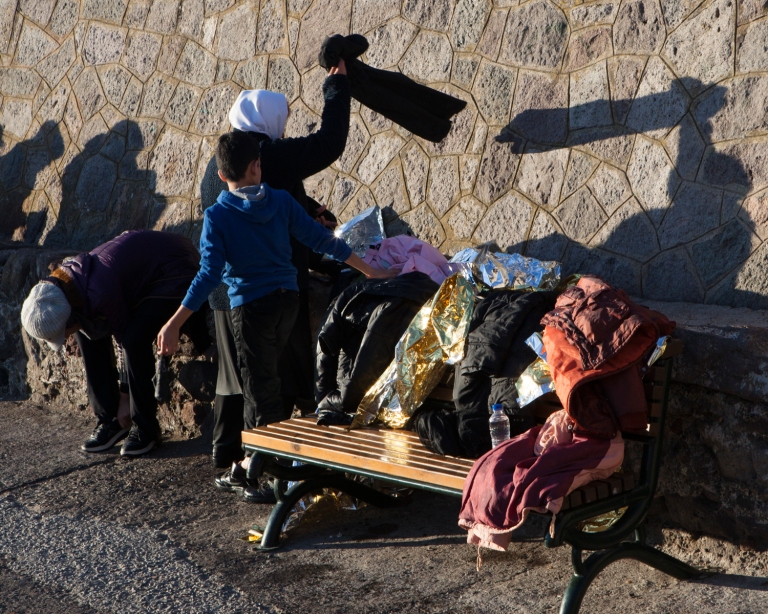 Then a Greek woman comes in to the restaurant and she is furious. She tells us that there has been a meeting at the town hall, and there is much bad feeling. Interrupting herself briefly – to apologise for ranting – she goes on to say that some local business people are blaming the refugees for their low profits. And they are also criticizing the volunteers, for ‘encouraging’ the refugees. She throws her hands in the air in frustration, telling us that she’s tried to be patient, she’s really tried not to shout, but tonight – she shouted.

And yes, there is little doubt that the summer tourist industry will suffer as a result of this crisis. But with more than 2,000 volunteers on the island throughout the winter period – all needing food, accommodation, car hire and petrol – I’m guessing that for some people, trade has never been so good. 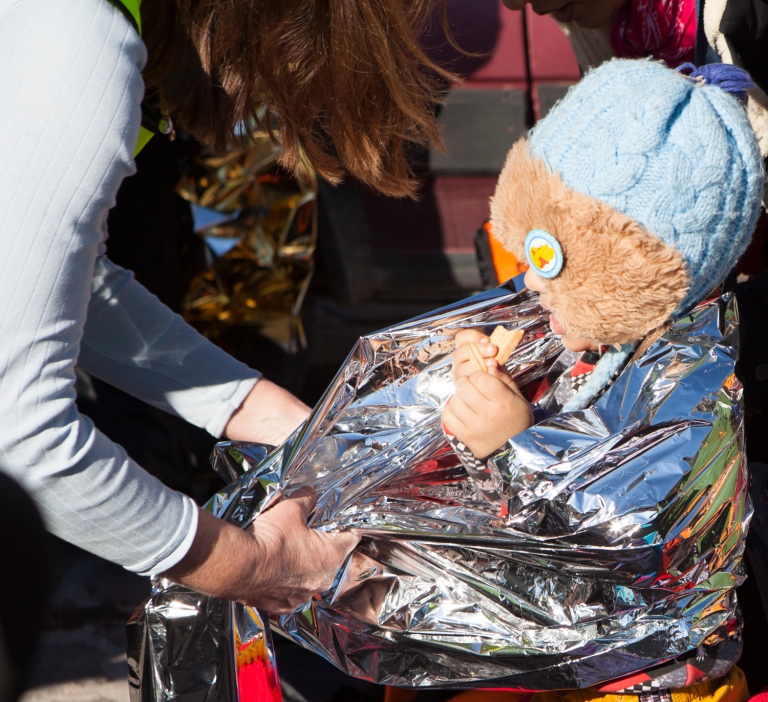 I’m not a politician and I don’t have a great mind. To be fair I don’t even have a theory. But if I did have a theory it might go a bit like this…

Now, pass the wine please and bring me a menu.

One thought on “Money, Power and a hot bath..”