Last night we did the late shift at Afghan Hill, Moria from 5 – 1 pm. And it was uncomfortable in more ways than one. Assigned to the clothing distribution tent, our task was not complicated, but neither was it simple. For the first three and a half hours we emptied boxes, bags and suitcases, replenishing the shelves before we ‘opened’ for business. 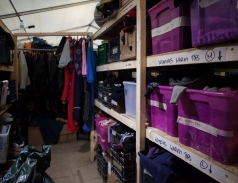 There has been a ferry strike and that means that in addition to the new arrivals there are also thousands of people stuck in transit. The camp is full.

The variety of generous donations arriving from all corners of the world is quite frankly staggering – not least in its range of colour, style and it has to be said practicality. Bear in mind that people frequently arrive cold, wet, and without shoes or coats. And then ask yourself, what possible use might they have for a pin striped suit, or pink stilettos, or wait for it….yes a full on, zip up the front, adult sized penguin suit!

Sometimes it’s hard to get your head around what people are thinking.

As we work, refugees try to attract our attention through the loosely threaded flap that passes for a tent door, although the sign clearly states in several languages that we will open again at 8.30 pm. Our volunteer co-ordinator tells us that we need to be firm and that unless someone is pregnant or children are involved, or another busload of new arrivals turns up, then people must wait.

I can’t help thinking about the unfairness of it all. The ‘Us and them’ of it all. And how uncomfortable I am, and yet grateful at the same time to find myself on the ‘us’ side of the tent. The side that decides when and to whom clothes are handed out, the side that is there completely by choice, the side that gets to go home at the end of the shift and get on with our privileged lives. I can’t deny that it makes me feel awkward.

We work our way through the endless boxes, diligently stacking the makeshift shelves with the most random assortment of donations for men, women and children. A kind of Alice in Wonderland shop where nothing is surprising, and everything goes. All sizes, all colours, some new, some not. All shapes, all fashions, some current, some not. And we try to figure out if shapeless leggings go on the mens’ or the womens’ shelf, or if trousers without a top button are worth keeping, or whether dresses from Next could go into the box labeled ‘Dresses traditional’, because there is no other dress box. We measure the waist size of trousers with a makeshift scale chalked onto a shelf, because we have learned that the numbers on the labels rarely correspond to any kind of universal system – that is if the numbers haven’t long since been washed away. 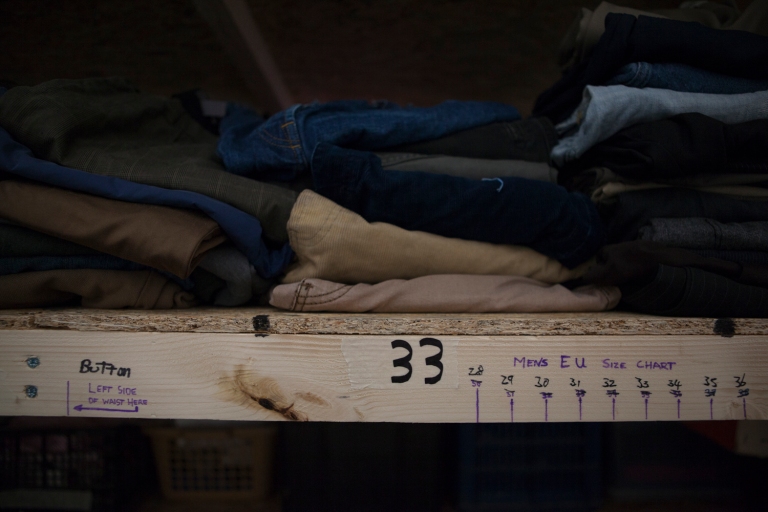 And in between the shelves – dogs play, and dogs sleep. 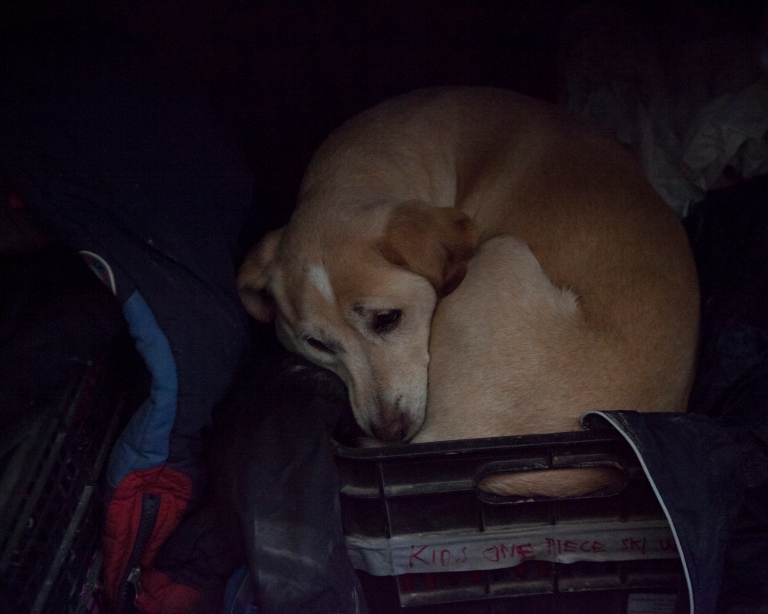 At about 8.25 our co-ordinator gathers us together for a briefing. She explains that there are some rules that we need to be aware of. It’s not difficult, she assures us, and we’d soon get the hang of it, but for now we could refer to the whiteboard where it was all written down. I think that our co-ordinator is a little bossy – and to be fair she uses the same word to describe herself. But as the evening progresses it becomes very obvious that a certain amount of ‘bossiness’ doesn’t go amiss.

And with this brief introduction  – we are thrown to the lions.

Two ‘queues’ form outside the tent, both behind grey metallic barriers, one for men, and one for women. There are maybe over a hundred people and approximately 3 volunteers approach the front of each queue. Most of us have little or no language skills, and no relevant experience that could have possibly prepared us for what was to come. 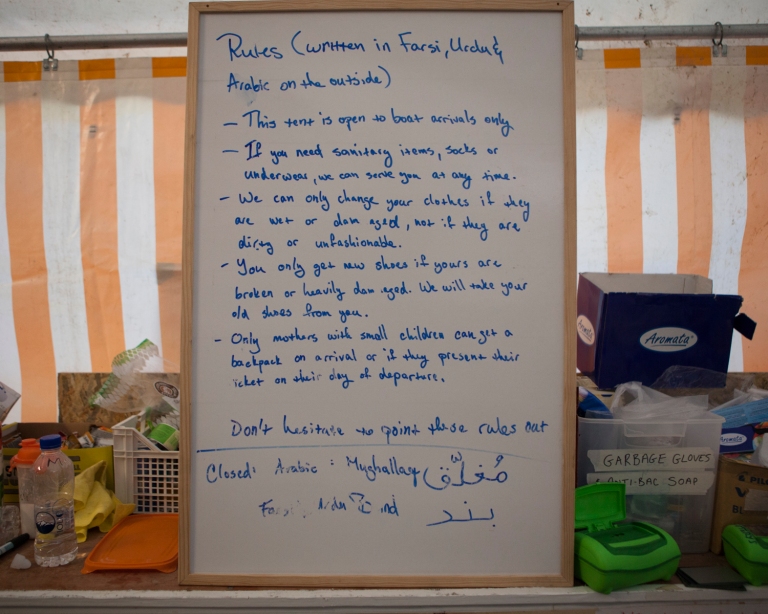 The refugees at Afghan Hill fall into several categories. New arrivals, those that have been here for a few days, and a small number that have been in the camp for several months. The political situation regarding who can travel – let alone where and when – changes daily. So people can become trapped – facing a prison sentence if they return home (or worse), but unable to acquire the necessary papers to continue.

Now I’ve said it before, and it’s worth saying again that people are people the world over. And that means the good, the bad, and yes those in life who just have to try it on at every opportunity. And when I say ‘try it on’ I mean both metaphorically and literally.

The rules on the whiteboard clearly state that ‘we can only change your clothes if they are wet or damaged’ – and in an emergency situation that does indeed seem reasonable. But what if your shoes don’t fit? What if they are partly damaged? What if your trousers are filthy because you were issued them 5 days ago, and there are no launderettes on the island? Or, what if you just look and feel like a prat?

Take five inexperienced volunteers, and a bunch of savvy refugees who have been around the camp block – so to speak. Stand back and and watch the sport.

Some people genuinely do have ill-fitting shoes, or clothes that are torn or wet. Others feel embarrassed about their new imposed dress code and hope to swap for something more fashionable. And there are the bored ones, who with nothing else going on decide to pit their wits against the ‘freshers’ in the volunteer tent – to see if they can win a whole new wardrobe.  And so we play the game. They ask for shoes, we ask what is wrong with the ones they have. They ask for jackets, we try to figure out if they have a suitable jacket already. They tell us that there are holes in the crotch of their trousers – who are we to ask them to prove it?

I brought two middle aged women new shoes and a plastic bag of toiletries, and they were delighted. They didn’t appear to have jackets, so I asked if they would like one. It’s difficult at first to look at a person, think about what size they might be, and then choose the appropriate size from a random collection of assorted garments at the back of the tent. Sometimes you have to make several trips before you find the right fit. So I checked the rail, looking for something nice, something that I thought they would feel reasonably comfortable in, appropriate for their age and culture. And I came back with two jackets. The women smiled and appeared to be pleased, but when they tried them on they were clearly too small. ‘No problem’, I said, ‘I will find some larger ones’. Well, it’s not always that easy. There may be larger jackets, but it’s not like we’re a department store where you simply bring back the same style in a larger size. But after a bit of hunting I managed to locate two warm jackets in a cream colour, which I believed would be a good match. They tried them on, and they fit perfectly. ‘Great,’ I thought. ‘Job done.’ But they looked at each other, and then at me, and to my utter astonishment one of them said: ‘Have you got in black?’

HAVE I GOT IN BLACK? Was I hearing right? ‘No,’ I replied ‘I haven’t “got in black” – We are not a shop and we are doing the best we can.’ Yet on another occasion, a man would ask for soap and toothpaste, or you’d find him some warm socks. And he would smile, look you straight in the eyes, and say ‘thank you, thank you’.  And it would bring you almost to tears.

Yes it’s sometimes hard to get your head around what people are thinking – on both sides of the tent. 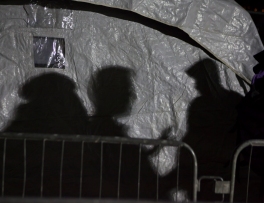